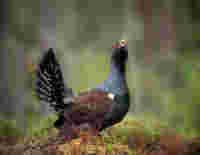 Puszcza Augustowska lies at the heart of Poland’s largest area of contiguous forest. The small village of Głęboki Bród is the center of an exemplary Capercaillie conservation project, which gives hope to a species that is in decline.

Situated just north of the famous Białowieża National Park, Puszcza Augustowska is not only the center of the Capercaillie Protection Program, but also borders another protected biodiversity reserve, Wigry National Park. This center, along with the 120-squarekilometer (46-square-mile) state hunting ground, is managed by the forestry office at Głęboki Bród. Every year, more than a dozen Capercaillie and Grouse are released into the wild from here. The young birds, equipped with a telemetry transmitter, are moved from another breeding center in the south of Poland in the fall, after a short adaptation period.

At the same time, birds are reared according to the “born to be free” method on a breeding farm located in Głęboki Bród. At the beginning of the year, the adult birds are placed in aviaries in separate parts of Augustów Forest, their natural habitat. When the breeding season ends, the hens stay in the aviary, but shortly after hatching, the chicks can leave the aviary whenever they want, while still maintaining vocal contact with the Capercaillie hens. Around fall, they are weaned from their mother and never return to her. The settling areas are fenced in with torches and bright pieces of cloth to keep predators away.

The Capercaillie no longer has a large area of distribution in Poland and has been on the brink of extinction in recent decades. It is estimated that there are only 600 birds left in the whole country. There were only 40 to 50 in Augustów Forest, but now there is a glimmer of hope. Thanks to the conservation efforts co-financed by the EU since 2013, the foresters of Głęboki Bród provided a refuge where male Capercaillie could make their unmistakable mating calls. In spring 2018, it was heard for the first time since the late 1980s. It was audible again this year and, it is to be hoped, in the years to come. The species has been rescued from extinction and now it is a matter of nurturing the Capercaillie population. This is where hunters have a crucial role to play. One of the greatest threats to Capercaillie is predators. Hawks are their worst enemy, so efforts have been made to capture these birds and release them at least 100 kilometers (62 miles) away. However, this method is not particularly successful because the hawk often returns after only a few days. The lynx is an occasional predator that is also under strict protection. But predators such as fox, marten, or badger are hunted to increase the Capercaillie’s chances of survival. In areas where Capercaillies are released again, it is legally permitted to hunt predators all year round. These are not only state-controlled hunting areas, but also areas that are leased by several hunting clubs. As there is no demand for skins, the value of hunting predators has increased again thanks to the financial support paid after each animal is shot.

The operators of the project hope that their positive experiences with the reintroduction of the Capercaillie will set a precedent and significantly increase the chances of its survival as a species.

The northeastern region of Podlasie is one of the coldest in Poland, although not quite as cold and rainy as Masuria. The climate means it has the shortest vegetation period in the country, lasting between 190 and 210 days. The area around Augustów is dry with marshy areas. The forests are dominated by majestic spruce, pine, oak, hornbeam, and birch, with the occasional lime tree.

Adam is a hunter and member of the Polish Hunting Association since 2010. He started hunting as a family tradition. Through hunting, Adam feels truly connected with nature and he gains access to meat of the highest quality. He loves the challenge and the responsibility that comes with his passion. Adam is a trained forester and works as a Deputy Editor-in-Chief of the countrywide monthly hunting magazine „Brać Łowiecka”. Nature means freedom as well as inspiration for life and work to him.