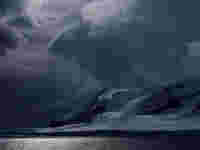 A very special seabird in Antarctica

To the end of the earth

There are certain birds that truly capture the imagination of many birders. Species that we dream to see. Birds that we know are going to be a challenge to find. Abundance, range, habitat and economics all conspire to make some species almost impossible to connect with. I say almost as just about every species is ‘gettable’.

...the southern region of the planet was still unknown; Terra Incognita. A thick barrier of ice prevented the early explorers from even seeing the continent we now know as Antarctica. Today, whilst still comparatively unknown it is far more accessible with expedition cruise vessels braving the Southern Ocean to explore the coastline of the Great White Continent. For birders the list of potential species is small but exceptionally interesting. The continent and its Sub-Antarctic islands harbor a unique range of species including the majority of the world’s Albatrosses and Penguins, a handful of passerines and a few isolated wildfowl and coastal birds amongst other species but it is the true Antarctic species that really get the pulses racing.

"For birders the list of potential species in Antarctica is small but exceptionally interesting. I am fortunate enough to have visited Antarctica on many occasions working as an expedition naturalist. It is a region that I never ever tire of exploring."Dan Brown

season and associated assemblages of wildlife. For most the gateway to the Antarctic starts with a voyage across the infamous Drake Passage, right through the Furious 50s but for some it can commence in New Zealand with an even more tortuous voyage through the Roaring Forties, the Furious Fifties and into the Screaming Sixties before land once again rises from the horizon. The Southern Ocean can be unforgiving. The ships ride the huge swells that roll endlessly around the lower reaches of the planet.

...that Pilot Whales and Hourglass Dolphins erupt from the crests of the waves above the height of the ship with a burst of energy and control that simultaneously creates awe and fear for us landlubbers. Wandering and Royal Albatrosses champion the wind with astonishing ease alongside many much smaller relatives from Light-mantled Albatrosses to White-chinned Petrels, Short-tailed Shearwaters to Mottled Petrels.

The first icebergs and a sense of apprehension

A band of fog often indicates the invisible confluence of cold and warmer water that is the Antarctic Convergence, beyond this the air turns frigid and a sense of apprehension can often descend on the voyage south. A pulse on the ships radar indicates the first looming iceberg hazardously drifting in our path and rapidly the single turns into multiple and the multiple into a giant ribbon of brash ice and bergs. This white snake of ice is of huge interest to the few seabirds that forage so far south. Piebald Cape Petrels bank and whirl along its edge searching for zooplankton to pick from the surface and amongst them, the first of the true Antarctic species, Antarctic Petrel, another black, coffee-coloured and white petrel though sleeker and more boldly patterned than Cape Petrel.

"Piebald Cape Petrels bank and whirl along the edge of a giant ribbon of brash ice searching for zooplankton to pick from the surface and amongst them, the first of the true Antarctic species: the Antarctic Petrel."Dan Brown

was full of birdlife

After six long days at sea a white crest of ‘land’ appears. Land is an optimistic description of what is one of the most desolate places on the planet, the Balleny Islands. They are situated at the northern end of the Ross Sea 67o south and 1500 miles from New Zealand (the Drake Passage is only 500 miles across). Ridges of stark black volcanic rock rise several thousand meters from the ocean floor to protrude above the wildest ocean on the planet, only to be encrusted with a thick envelope of ice.

...in fact only a handful of people have ever done so but that doesn’t mean this seemingly inhospitable archipelago is devoid of life, far from it, thousands and thousands of birds master the air in what is undoubtedly the ultimate Antarctic seabird colony. Antarctic Fulmars numbering several tens of thousands of pairs whirl and glide on ridged wings and the glaciers are festooned with white dots – Snow Petrels, hundreds of them! And these aren’t just your ‘standard’ Snow Petrel. The colony here consists solely of Greater Snow Petrel, a larger and more robust species than Lesser Snow Petrel.

The Balleny Islands are the only place on the planet where you can reliably find them. They take advantage of nooks and crevices in the few exposed bits of cliff to breed, dodging the frequent avalanches and foraging out over the brash ice-filled ocean which at the height of ‘summer’ is a mecca for Humpback and Fin Whales and even the occasional Blue Whale. Blizzards of these pure white Procellariiformes can fill the air in spiraling flocks.

For such a desolate place it’s a hub of life, all of which has evolved to be able to thrive in what to us is a hostile environment. To actually see such a range-restricted species like Greater Snow Petrel here is a true privilege.

Dan Brown is a professional ecologist and passionate naturalist who started exploring wildlife at an early age. He grew up in North Wales and first visited Antarctica when he was 18 as a member of the first youth expedition. Together with his wife Rachael he runs Wild Discovery. They organize fully inclusive wildlife expeditions and short tours, all supporting conservation programs and sustainable initiatives and promoting green livelihoods. Dan writes for popular birdwatching magazines and has authored two books on British birds.