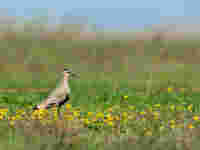 Once widespread in Eurasia, with a breeding range extending from Ukraine in the west to China in the east, Sociable Lapwing has suffered a dramatic decline in distribution. This range contraction is closely connected to the conversion of natural steppe to cereal production and other agricultural changes which took place in the 19th century and subsequently during the Soviet era.

Numbers declining in the 20th century

The shrinking of breeding areas was matched by a sharp fall in numbers. In northern Kazakhstan, for example, a decline of 40 per cent between 1930 and 1960 was followed by a further halving of the population from 1960-1987. In Europe the situation was even worse, with an estimated decline of at least 80 per cent in 27 years. The species is now confined to an increasingly small area of Kazakhstan, with an outlying population in south-central Russia also just about hanging on.

So alarming was its predicament that in 2004 BirdLife International uplisted the species’ conservation classification to Critically Endangered, with some authorities believing that just a few hundred breeding pairs were left. So why has the species continued to fare so badly?

Experts began to investigate the issues and collaborate on an international species action plan, establishing a research project on the breeding grounds around Korgalzhyn in central Kazakhstan. A year after its conservation classification had been uplisted to the highest level, scientists from the Association for the Conservation of Biodiversity in Kazakhstan, the Royal Society for the Protection of Birds (RSPB) in the UK and research students from Kazakhstan and Germany began locating nests and assessing potential emergency conservation measures.

Interestingly, their studies did not confirm early fears that nests were being excessively trampled by livestock, or that young birds were not reaching maturity. Instead, it seemed that adult survival was poor, and with nothing to suggest high mortality on the breeding grounds, they needed to expand the scope of their research to look at migration routes and wintering areas.

The species had previously been reported outside the breeding season mainly in north-east Africa, the Middle East and India, but little was known about the specific routes it took. Survey work in Syria in early spring 2007 produced a major surprise when up to 2,000 Sociable Lapwings were found – a positive boost to known numbers – but illegal hunting also emerged as a threat. More fieldwork was clearly needed.

Objective: To safeguard the breeding grounds with the focus on Kazakhstan; cross-border cooperation to protect the birds’ key resting places on their migration routes and their wintering grounds from India to north-east Africa.

Objectives: to carry out coordinated research on the Canada Warbler across its entire habitat (North and South America, the Caribbean); to acquire important knowledge and safeguard its long-term survival.

Objectives: to record the numbers of raptors migrating; to step up the PR and educational activities with the aim of curbing the illegal hunting of raptors.

Objectives: to set up a network of professional Community Bird Guides throughout the whole country; to provide an additional source of income for the local population; to generate added value for the population by preserving important natural habitats.

Objective: to ensure the long-term survival of the endangered Ethiopian Wolf; this includes rabies vaccination campaigns for domestic dogs in all the adjacent settlements to prevent disease or the monitoring of wolve populations.

Objectives: to support various projects that aim for the protection of Africa’s remaining chimpanzees; to give people the opportunity to safe and appreciate the natural habitats of the chimpanzees; to educate and raise awareness in people.

Comprehensive research studies of this kind can run over several years and require significant support, so in 2008 SWAROVSKI OPTIK became a BirdLife Species Champion for the Sociable Lapwing alongside the RSPB. This commitment was renewed three years later, and five pairs of EL Swarovision binoculars and two ATM telescopes were also provided to assist with survey work.

At the time Andreas Pittl, then Head of Marketing at the company, said to those involved in the project:

"We believe in the team and your planned activities to reach our common goal – preventing the incredible Sociable Lapwing from extinction. I want you to know SWAROVSKI OPTIK is supporting you every step of the way. We have increased our annual financial contribution and are providing this optical equipment to help new members of the Sociable Lapwing International Working Group with their important monitoring and fieldwork. Please keep up the good work!"

Korgalzhyn, at the core of the field area, Preparing a bird for tagging, Searching for Sociable Lapwings, Setting out leg nooses, Tagged Sociable Lapwing - all images by © Paul Donald

Further research into the species’ migration habits, including fitting some birds with satellite tags so that their journeys could be tracked, helped confirm that the Turkey-Syria border was a major stop-over area, and also that some individuals continued on as far south as Sudan.

Subsequent tagging work also tracked birds taking an easterly route pausing on the Turkmenistan-Uzbekistan border, and in autumn 2015 some 6,000-8,000 were estimated to be using this area – an extraordinary number. These eastern birds are believed to winter principally in Pakistan and India.

The discovery of stopover sites like those in Syria and on the Turkmenistan-Uzbekistan border, holding large numbers of Sociable Lapwings, has provided remarkable insights and led to spectacular counts. However, combined with the programme’s discovery of the hunting threat to migrating Sociable Lapwings, this suggests a worrying vulnerability, and habitat loss at stopover sites is also a concern. The project has worked with the authorities in both Turkmenistan and Uzbekistan to ensure the protection of the vital border area, including steps towards the creation of a nature sanctuary connected to Koytendag State Nature Reserve in the first-named country.

Recent surveys have suggested that Sociable Lapwings may be nesting more frequently on arable fields in central Kazakhstan and this is leading to trials of nest protection measures to see if breeding success can be improved. Furthermore, once-occupied breeding colonies around some villages have been deserted by Sociable Lapwings, possibly due to changes in vegetation structure which makes the habitat less suitable for nesting. Researchers are working with local shepherds to investigate whether targeted conservation measures such as increased grazing can bring the habitat back into suitable condition. Results are expected in the next few years

Today, much more is known about the breeding ecology and migratory strategy of the species, and its predicament is not as dire as feared back in 2004. Nonetheless, its decline may not yet be over – numbers continue to fall at some sites where there is long-term monitoring. While steps have been taken to support the breeding populations, and to protect stopover sites, further down the western flyway illegal hunting has emerged as the most significant threat. This affects many other species too, and an international workshop took place in October 2021 in Jordan to begin the development of a ‘road map’ to eliminate the illegal killing of all birds across the Middle East. Members of the Sociable Lapwing team are there to show the importance of this species as an icon of the flyway.

An iconic species of the steppe landscape, Sociable Lapwing is not out of trouble yet. But with support from BirdLife Species Champions and other organisations, targeted conservation measures and protection of key stop-over sites, as well as ongoing research and monitoring, it will be given the best possible chance of survival.