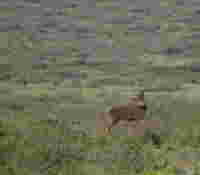 No man is an island, poet John Donne informed us, but plenty of humans live on islands, usually to the detriment of wildlife living there. Consider the extinct Tasmanian tiger, dodo bird, New Zealand’s moa. Extinct from a combination of unregulated shooting, habitat destruction, and competition from introduced domestic animals. But not the axis deer on Lanai. They are not being hounded to extinction; they are being shot to health.

My wife and I recently went on a trip to hunt Lanai axis deer, glassing their spotted and antlered forms flickering, dipping, disappearing, and reappearing as they browsed and grazed across the vast, dissected green plains of Hawaii’s smallest inhabited island. “The far ridge,” I said, never moving my binocular off the spot. “Just coming up through that brush.”

“Got ’em,” our guide Alec confirmed. “Two more than I was watching over here.” The deer were silhouettes ghosting through early morning fog, metamorphosing from gray to orange as the sun burned through the vapors arising from the night’s rain.

The deer were silhouettes ghosting through early morning fog.

“I see two bucks sparring,” Elizabeth reported. “We should go after those.” Hunching, duck walking, and crawling, we stalked and slipped inside sure hitting distance, but not before bumping a half dozen other deer that had been foraging out of sight in a small thicket. Fortunately, they dashed wide of our quarry, leaving them undisturbed.

“We make it to that bush we should have a shot,” Alec estimated. He led, Elizabeth followed, and I brought up the rear with my camera. The chosen buck’s antler tips were bobbing behind the green-ery when my wife set up, rifle steady atop a slim, portable bipod. We waited. A doe, three more does, and four fawns fed into the clear, ripping grasses and stepping ever closer. If the buck didn’t clear soon, the herd would drift into our scent cone and erupt. “Here he comes!” Alec hissed. “There’s his head. Wait for his shoulder to clear.” It did, Elizabeth fired. We’d concluded the first step toward introducing to our dinner table what many consider the world’s most delectable venison.

After sampling our first buck, my wife and I stalked and shot an additional buck and two does. Our guide drove the carcasses to a custom butcher in Lanai City who skinned, aged, and cut them into steaks, chops, and roasts. We ferried the cuts to Maui to share with friends, then flew the remaining meat home in a standard airline fish box.

The hunting trip was organized by High Adventure Company: highadventurecompany.com

Would you like to learn more about the concept of sustainable Axis deer hunting on Lanai?

Read the second part of our article:

Vai a Panoramica di tutte le storie
On the island of LanaiSustainable hunting
EL Range#closer2huntingViaggi
Tempo di lettura: 4 minuti
Fotografia: Dramatic seascapes and the rocky tide pools of the Pacific can be discovered along the coastline.

In addition to stalking the island’s 30,000 spotted deer, hunters can glass and stalk feral mouflon sheep. Or tune up their shooting skills at sporting clays, archery, handgun, and rifle ranges with targets as far as 1,250 yards (1,143 meters).

But Lanai offers more than just shooting sports. Vacationers can negotiate 400 miles (644 kilometers) of unimproved trails. Hike, bike, ride horseback, or rent a 4x4 and explore natural wonders and historic sites like the 600-year-old Kaunolu Village ruins and petroglyphs on the sea cliffs above Kaunolu Bay. Or follow in the wake of those ancient islanders and fish the same deep waters old King Kamehameha I used to troll.

For a more encompassing view, hike the 13-mile (21-kilometer) Munro Trail along the island’s ridge to the top of 3,370-foot (1,027-meter) Lanaihale, the extinct volcano that emerged from the Pacific to build this island millions of years ago.

Closer to sea level you can stroll the coastline to dramatic seascapes like Pu’u Pehe, Sweetheart Rock, where you can investigate rocky Pacific tide pools. Dig your toes into gentle sand beaches where sea turtles rest while dolphins patrol just offshore. Swim and snorkel the blue waters of Hulopoe Bay. For a change of pace, explore historic Lanai City’s quaint restaurants and coffee shops. Learn more history at the Lanai Culture & Heritage Center.

Don’t forget your binoculars. Whether in Lanai City or prowling the hinterlands, you’ll spot exotic, introduced birds from Africa, Brazil, and Japan plus native species like the endangered Hawaiian petrel. Pacific golden plovers are common and tolerant of people poking big lenses at them.