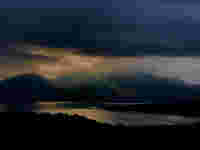 The Isle of Mull - located off the wild, rugged, west coast of Scotland - is arguably one of the last remaining areas of pristine wilderness that we have in the UK. With a population of just 3,000 people and much of the island remaining untouched by human activities, the abundance and diversity of wildlife there is staggering. Harbour seals, grey seals, bottlenose dolphins, golden eagles, white-tailed eagles, hen harriers, buzzards, short-eared owls, red deer, fallow deer, wild goat tribes, stoats, and peregrine falcons, to name but a few. That list doesn’t even scratch the surface. Mull also boasts numerous invertebrate species, an impressive host of flora and fungi, amphibians, thousands of birds, and some exciting summer visitors like the basking shark, minke whale and white-sided dolphin.

As well as an incredible array of wild inhabitants, Mull’s landscape is stunning. It has a mountainous core, with peaks reaching as high as its tallest Munro, Ben More, which stands at 966 metres. These dramatic peaks are often paired with rough terrain that dips to meet the turbulent Scottish lochs, and on rare occasions, a loch surface as a flat as a mirror. In both weather conditions, every single loch inlet, bay, coastal road, mountain pass and striking landscape formation will leave you feeling stunned.

The Isle of Mull is truly one of the most breath-taking places I’ve ever been to, anywhere in the world.

As if Mull couldn’t get any better, it’s also the centre stone for several conservation success stories.

Once trapped, poisoned, and shot, the formidable and enormous White-tailed eagle was severely persecuted and declared extinct in the British Isles in 1918. A reintroduction project was attempted on the Isle of Rum in 1975 and this marked the return of white-tailed eagles to Scotland after an absence of nearly 60 years. Several of the birds, flew west, settling naturally on the Isle of Mull and the island is now home to approximately 18 breeding pairs.

I’ve yet to even mention the star of the show; an animal that I was desperate to see when I was little and the very creature that lured me to this far-flung island in the first place. I’m, of course, referring to the elusive and charismatic Eurasian otter.

With stretches of coastline over 300 miles long, the Isle of Mull is thought to support one of the highest densities of otters in the UK. An animal so rarely seen in other parts of the UK that it has an almost ‘mythical’ status. Elusive, enigmatic, and mysterious, the majority of people will go their entire lives without glimpsing a wild otter. Flowing waterways keep their secrets and they spend half of their lives submerged in an aquatic environment that we can never truly be a part of. The very fact that we know so little about this animal is perhaps the thing we find so intriguing about them.

Once declared locally extinct in large swathes of England, Wales and Scotland, the otter’s comeback is a remarkable conservation story. They experienced one of the most drastic population declines between the 1970s-1990s, disappearing completely from huge areas of the country. Caused by a combination of persecution, declining water quality, organochloride pollutants and habitat loss, it wasn’t until the late 1990s that otter populations began to recover. The 1981 Wildlife and Countryside Act banned the persecution of otters, organochlorides were prohibited in the 1990s and reintroduction programmes were started in areas where otters had been worst affected. Today, otters have expanded their range and are found in almost every county in the UK. One of the places that has always remained a stronghold for the otter is the west coast of Scotland, and the Isle of Mull – with its thriving population – is the perfect place to encounter your first wild otter.

I’ve now visited the Isle of Mull twice and most recently I spent the entire month of September on the island co-leading a photographic workshop.

Each and every encounter I have shared with a wild otter can only be defined as magical.

To be given the opportunity to learn more about their submerged, watery world, to be treated to the intimate behaviours exhibited by a doting mother to her young kits, to watch a dog otter patrolling his territory and fishing for hours in the salty waves, fills me with a deep sense of belonging. I come away feeling honoured and humbled to have observed this mischievous animal in its natural habitat, and with a renewed sense of love and passion for our native wildlife. All these enchanting encounters have made me consider the ‘need’ to always be travelling abroad for wildlife photography.

CL Companion 8x30 B€ 1.250,00
The wildlife on our own doorstep is so overlooked and yet, I’ve never felt so connected to nature as I did when observing otters on the west coast of Scotland.

Lara is a conservation biologist and award-winning wildlife photographer whose research has taken her around the world. Whilst she specialises in black rhino feeding ecology, she has also been fortunate enough to study dolphins off the coast of East Africa and mouse lemurs in Madagacar's dry forests.

She strongly believes that raising awareness and increasing engagement is the key to successful conservation efforts. Lara is determined to use her camera as a voice for the voiceless and continue telling the stories of those who work tirelessly to conserve some of the most endangered species on the planet.

The young British biologist is part of our Nature Explorers team and gets closer to nature with her CL Companion.

To see more of Lara's work and to hear conservation tales from around the world, visit her instagram account.

Do you want to observe impressive wildlife and immerse yourself into nature?

Then you don't have to travel far. The most wonderful discoveries are often waiting just around the corner. We asked our Nature Explorers team about the most beautiful experiences they had in their area.

Who knows? Maybe you will discover unexpected wonders right at your doorstep on your next outdoors adventure too.